Skip to content
Home » Bob-O Too Fast for Eugene

Bob-O Too Fast for Eugene

When spotters didn’t see him enter the stadium, they were concerned 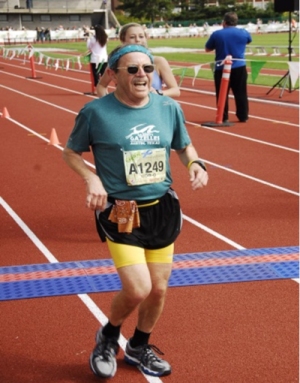 After an hour of waiting and searching, it was discovered that he had actually been so far ahead of his pace group that no one was even looking.

With a final time of 3:43:26 in the 2012 Eugene Marathon (Eugene, OR), Bob Santos fulfilled a life long dream and qualified for the prestigious Boston Marathon in April 2013. Adding to the magic of the moment, Bob accomplished this at historic Hayward Field, home of his running hero, Steve Prefontaine. When asked about the race, Bob said, “As I entered the stadium, I was grinning from ear to ear!”.

Congratulations and good luck at Boston!