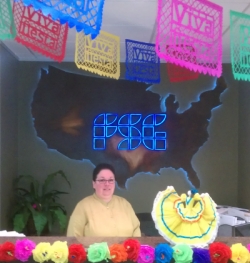 It’s Fiesta time in San Antonio to celebrate the annual NIOSA festival and the SA branch got into the spirit!

This week, if you walk thru the front door of FSG Electric in San Antonio, you will be greeted by Elda Carranco and the festive atmosphere!

Night in Old San Antonio is a 4-day event which co-insides with the week long city Fiesta events. It is put on by the San Antonio Conservation Society where the proceeds go to restoring old buildings.

Our San Antonio division installs temporary lighting and power for all their food and drink booths. That consists of  70 temporary panels throughout the area which covers about a square block.

Warren Lampman (FSGE-10 Project Manager) has been involved with this event since 1975.

History of NIOSA: In 1937, the San Antonio Conservation Society planned a one-day Native American Festival along the banks of the San Antonio River to celebrate the heritage of the city’s early settlers while raising funds for historic preservation. What began with a handful of Society ladies serving food and drink from river barges, has grown into a mammoth enterprise orchestrated by over 16,000 volunteers who stage and man the annual four-night event each April.  The historic, downtown village of La Villita takes center stage as 85,000 visitors now come through the gates during NIOSA. http://niosa.org/Home.aspx