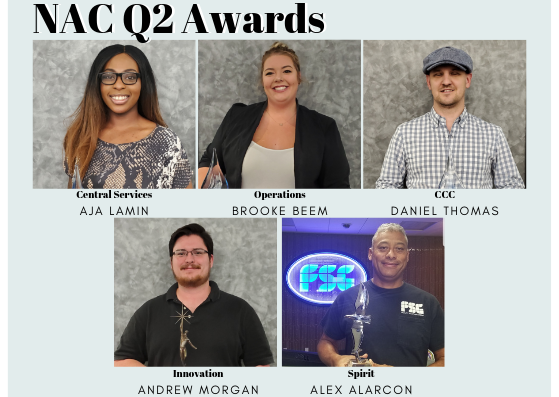 Aja has been with FSG for less than a year now and has shown great enthusiasm to learn and grow professionally. She’s worked hard and worked overtime to gain the maximum benefit from her work. At the beginning of the year, Aja set goals for herself during the review process and has accomplished all 3 goals that were set including the goals that were set by her supervisor. Her daily production average has increased by 45-50 work orders. Aja has decreased her average bill days on her top 2 customers for her team and manages to keep her over 30 work orders to a maximum of 5 work orders. Aja effortlessly displays herself as a team player. She always has a positive attitude and is a pleasure to have on the billing team. She has truly set the bar as a rising star at FSG.

Louis Vuitton had their first-ever fashion show this past May in NYC that was held at 6 of their main stores.  This put a lot of pressure on FSG and the stores to ensure they were perfect for the week-long event.  The entire month prior to the show Brooke spent countless hours on the phone with the store managers, LV Corp, and tech offices ensuring that visits were coordinated weekly/daily, overnights set up with security/store, lights being repositioned to planograms, and all electrical/lighting was 100%. Brooke was able to accomplish all this and received great praise from LV all while running the rest of the Louis Vuitton maintenance calls for the nation along with the top 20 Sephora stores.  Just when she thought it was over she is now performing the same miracles for the west coast stores as they prepare for the LVX history museum reveal and the who’s who of people visiting it.

The amount of work he handles for our team is huge.  He took a difficult account like Burlington and has really made it streamlined.  While out on vacation, while it was a lot of work, it was extremely easy to cover for him.  His organization on the account, I would argue, is some of the best in the customer care group. I appreciate his efforts on the account and look forward to giving him other accounts to do the same with.  So far this year he has handled over $6M in project sales for Burlington.

Alex Alarcon joined FSG as the Ops Mgr in LA back in July of 2005.  He has served in that capacity until April of this year when we turned MDC912 back over to the local division.  Alex is a very talented individual and has been a key contributor for his entire 14 years with the company.  We did not want to lose his talent and experience so we asked him to change his focus from leading one organization to being a member of another, from managing people and distribution operations to managing lighting projects.  He accepted the challenge with a great, positive attitude and immediately had a huge impact on the success of CCC Team 5.  His team lead says: “What a bright light Alex is! He has one of the most joyful, uplifting, positive attitudes of anyone. Even in high-pressure situations, he remains his happy upbeat self. I always look forward to his calls because I know he is going to make me smile and laugh. He was the perfect addition to our team!”  A senior leader within FSG who works with Alex daily has this to say about him:  “He has the ability to lift the spirits of the entire team in the midst of daily firestorms with GC’s and EC’s.  And I have never seen him without a smile on his face!”  One of the most competent people in the company on Trend, Alex has made significant contributions to the JPMC Retail project, the overall system expertise of his team, and his contagious, positive personality and attitude has made FSG a better place to work.

Andrew Morgan for the weeks of prep time he has eliminated from Circle K Rollup assembly and material ordering through his total redesign of our excel template. The efficiencies gained allow us to respond to the customer’s needs much faster than we could before with a much more user-friendly tool. This is saving FSG thousands in data entry costs as well as reducing the input error potential. (Now we are applying the same process to every other customer as well.)