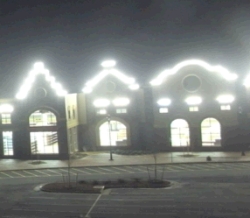 In January 2012, FSG Electric was hired by Henderson Construction out of Williamsburg VA to design, budget and install linear LED Lighting along the roofline of the new Williamsburg Pottery shopping center.

The construction project included over 1/2 mile long of building facade for this new tourist destination shopping center. Starting in June 2011 with nothing more than an architectural drawing of proposed buildings, FSG worked closely with Specialty LED, a division of Barron Lighting, to develop the LED lighting design for the Owner’s approval.

After receiving design approval, it was then up to Dave Morales from DE14 to figure out how to actually install it! The LED strips are weatherproof and sealed, so puncturing the strips in any way was not an option. Dave came up with the combination of brackets and silicone the strips to the building, a new and innovative approach.

FSG was ultimately contracted to install over 3000 linear feet of LEDs using over 200 drivers and tying into the buildings lighting panels. Despite the project being located in Williamsburg VA, over 350 miles from Perth Amboy, NJ, the FSGE14 installation crews outperformed any expectations from Henderson Construction and the LED Lighting  is considered to be a crowd favorite. Congratulations to Dave Morales and all the hard working installers who pulled off this difficult but exciting project!