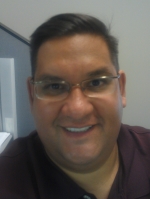 FSGL Houston was awarded the $164,000 project in November of 2011 and the installation began on December 15th. Part of the award also included a private suite to three concert events and Basketball games.

“The Toyota Center project was a big feather in our cap” says Able Figueredo, FSGL Houston, Business Development Manager. “We were up against four other very well known Sign Contractors. We won the job by exceeding our customer’s expectations of our attention to detail and in our ability to deliver”.

Able worked closely with Laura Bacon (GE’s Regional Sales Manager of GE LED Lighting Solutions), to insure that we fully understood the expectations of our customer.

A big thanks to Steve Laxton (Aerial Project Manager FSG). He was extremely valuable in making this project a huge success.

When it was all said and done, the Toyota Center Roof never looked so good. It’s now dressed and ready to be seen when Houston hosts the 2013 NBA all-star Game.

Any final comments Able? “Needless to say we are ready to loosen our collars and party like a rock star”.