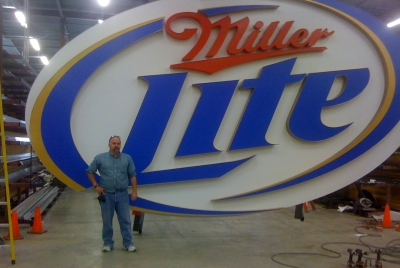 FSG Signs is still going strong at Cowboys Stadium in DallasTexas, after successfully completing the initial 1.2 Million dollar exterior wayfinding (vehicular and pedestrian directional signage) contract, awarded in 2008. FSG recently provided another 1.4 million dollars worth of signage for both the interior and exterior of Cowboys Stadium.

We have become the go-to contractor, providing everything from a $40 ADA panel to a $120,000 cantilevered gate ID indicators. After all this time no one knows the 2-million square foot stadium better than the FSG team. We created volumes of signage drawings and documentation. We can answer just about any question. 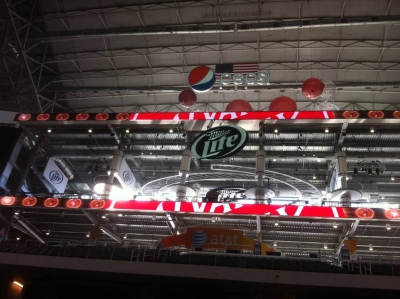 Hoisting the 15′ x 23′ oval illuminated sign to the hall of fame level at the Cowboys Stadium was as complicated as it sounds. It required the end zone glass doors to be opened. The process took about 45 minutes and was an impressive and memorable experience. The process required x-raying of the concrete beam to locate the rebar and temporarily hanging 5,000Lbs from each of the four supporting anchor bolts for twenty four hours to test their strength. Raising the sign into place required an articulating boom and hoisting motors. All went as planned.

This project went very well due to the great planning and execution of Dan Tessier (fabrication), Michelle Bills (project manager) and the Fort Worth electrical division who took care of permitting and supervision of the installation.
As promised the Miller Lite sign made it up in time for the big Thanksgiving game against the dolphins. Who would have known that the Cowboys winning field goal with a few seconds left would showcase our efforts. It was just another one of those magical and blessed moments that has made the entire Cowboys Project a once in a lifetime experience