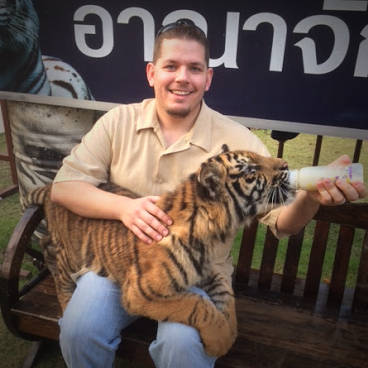 Christopher Hinshaw of FSG’s Midwest region recently had the opportunity to serve along with members of his church family on a mission trip to Thailand.

“This past January, God graced me with the opportunity to represent Post Road Christian Church on a trip to Chiang Mai, Thailand. This mission of this trip would be to evaluate our missionary partner and evangelize to the local hill tribes of Thailand. Our excitement to spread His word and share in the bonds with our Brothers & Sisters in Thailand was hardly contained during our 23hr flight to Thailand.

Upon our arrival we were greeted warmly by the local missionaries Abel and their two sons Mark & Luke. With the extended flight, we were given two days to rest up and tour Chiang Mai, which is Thai for “New City.” This also gave us an opportunity to get to know the rest of the group that we joined for the trip (Tom & Linda Nation, Donna Crotchett, & the ever adventurous Bonnie Baldwin, who was on her 9th trip at 81 yrs old). Our first stop was to the Lasu Village of Nong Kheo, which is about 3 hours north of Chang Mai and a little over 10 km from the Burma Border. This vibrant village is a Christian Village and we were surprised to see the energy from the youth that included a contemporary band. After the Service. the Minister invited us back to his home, where we were served fresh fruits and a traditional Lahu meal, which consisted of local rice with fried egg, sweet potatoes, and a pork soup.

The day after our trip to the Village of Nong Kheo, we visited the Chiang Mai Night Safari. This was very similar to our Zoo’s, but with a unique twist of being interactive with the animals. We were able to feed and pet many of the animals; including Giraffes, Elephants, Porcupine, Binturong, Kinkajou and a Tiger!

Our next stop was to Mae Gon to stay for four days assisting with the Orphanage and preaching at the Bible Conference, consisting of 5 services throughout the day. Currently at the orphanage, there are 26 children along with the house parents (Veeni & Song and there 2 children). At the orphanage, the chores are split up among all. The girls would be in charge of sweeping/mopping the floors, & preparing/cooking the meals. The boys were responsible for maintaining the livestock and processing the livestock when ready to eat.

By the end of the Bible conference we had grown attached to the children and locals, preached a total of 18 sermons in total, purchased 7 pigs, new concrete roofing and labor to restore the roof and clothes for all the children. Hugs and goodbyes were shared by all and many of the children did not want to let us leave and it was hard as we left. Never have I ever felt the Grace of God living so freely in one area. These people lived their entire lives for one purpose; to Serve God. The most inspiring moment of the conference was when the conference would pray. The Lahu believe that Prayer should be done as a group, with each using their own personal prayer to GOD. You could feel the Holy Spirit moving among his people. Our intention had been to share God with the people, but God refreshed us with his love and demonstrated that his people in Mae Gon were being the shepards of the flock.

At the conclusion of our trip, I could see that God was using Abel to spread the word to the people of Thailand. He is primarily focused on the Hill Tribes of Thailand as this is a group of people that are constantly of living in fear of spirits. Once they learn of the love of God, they latch on and spread the word to others. Thailand is a land of respect and the culture is a culture of smiles.”