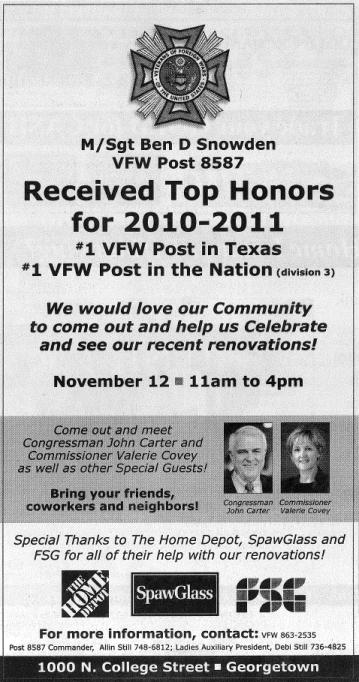 The VFW traces its roots back to 1899 when veterans of the Spanish-American War (1898) and the Philippine Insurrection (1899-1902) founded local organizations to secure rights and benefits for their service: Many arrived home wounded or sick. There was no medical care or veterans’ pension for them, and they were left to care for themselves.

In their misery, some of these veterans banded together and formed organizations with what would become known as the Veterans of Foreign Wars of the United States. Since then, the VFW’s voice had been instrumental in establishing the Veterans Administration, creating a GI bill for the 20th century, the development of the National Cemetery System and the fight for compensation for Vietnam vets exposed to Agent Orange and for veterans diagnosed with Gulf War Syndrome.

In 2008, VFW won a long-fought victory with the passing of a GI Bill for the 21st Century, giving expanded educational benefits to America’s active-duty service members, and members of the Guard and Reserves, fighting in Iraq and Afghanistan.

The VFW also has fought for improving VA medical centers services for women veterans. Annually, VFW members and its Auxiliary contribute more than 13 million hours of volunteerism in the community. From providing $2.5 million in college scholarships to high school students every year to encouraging elevation of the Veterans Administration to the president’s cabinet, the VFW is there–honoring the dead by helping the living.

Concerned with veterans issues and needs, a group of Georgetown Veterans began meeting in 1966, they chartered Veterans of Foreign Wars Post 8587 in August of 1967.

The membership chose to name the post for “ Master Sargent Ben. D. Snowden”. Ben Snowden grew up in Georgetown, went to school here, his family lived here, he joined the military here and most of the members knew him. He excelled in the military as he had growing up, he became a Green Beret, a team leader. He was killed, in Viet Nam, on a volunteer mission, to rescue team members, who were being overrun by the communist . M/Sgt Snowden was only 30 years old, a family man and it was felt he epitomized the ideals of service and sacrifice.

These first members constructed our current post building in 1968, with funds and building materials donated by our membership and local citizens. An addition was built on in 1976.

We currently have over 950 Post Members made up of Veterans, Active Duty, Reservist’s and Retiree’s from all Branches of the US Military.