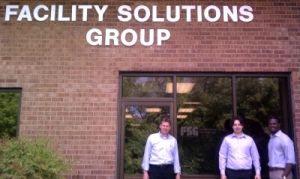 Division-22 Baltimore is up and running!

The program has $27 million in funding over the next three years and includes a host of lighting measures as well as faucet aerators and hot water heater insulation. FSG intends to promote and sell larger projects and to start up services in Baltimore as well. FSG procured space, furnished it, wired it and is open for business, in just over 8 weeks after being notified of our award.

Keith Isoldi has been named our Branch Manger for Baltimore. Keith, who resides in Maryland, joined the NJ Branch in January 2011after being a long time FSG customer from Einstein Bagel. His focus has been on National Account Business, and has had some major successes with customers like Chipotle and Dunbar.

Steve Malave will be our Baltimore Operations Manager. In just three and a half short years, Steve has gone from re-lamping Old Navy stores to Service Dispatcher, to Project Manager over multiple lighting retrofit projects.

Nedje Severe is named as the Business Development Manager for the new division-22. Nedje joined FSG fresh out of Rutgers with a degree in Environmental Business in June of 2009. He was part of the first group of hires to go through our new “Fast Track” Energy Sales and Auditing Training program, and has one of the most positive can-do attitudes in New Jersey. Both Steve and Nedje have relocated to the Baltimore office.

New Jersey’s loss is Baltimore’s gain! Keith has hired warehouse and administrative personnel locally for the branch, and Nedje is building his sales team. Steve has already established a subcontractor network and is interviewing tech’s, with the help of  Dave Morales from NJ. The team sold nearly 20 projects before having a phone line, thanks to the hard work and efforts of the new team along with the efforts of  Steve Agudelo from NJ sales. Product is flowing in to the warehouse and we hope to be installing in a week or two!